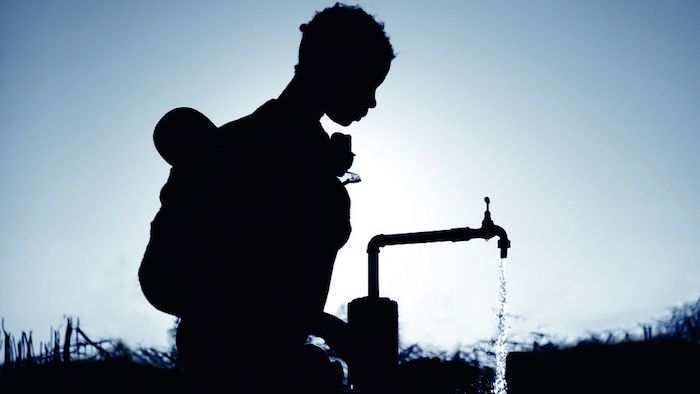 Next Tuesday (22 March) is World Water Day, and I’ve teamed up with Giorgio Armani in a poignant campaign.

Most of us take the water that runs freely out of our taps for granted. I realise that this year may have changed many people’s outlook on this incredible scarce resource, but most of use won’t realise how phenomenally privileged we are to access to water at all. 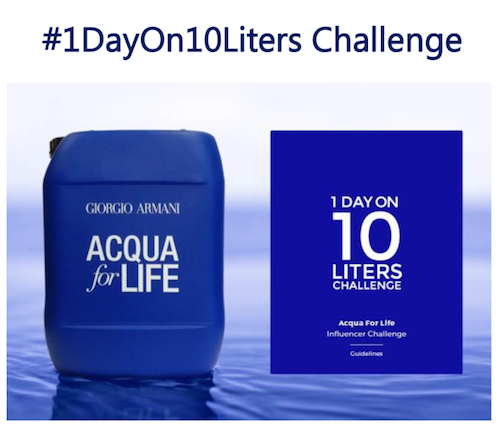 This is why I’ve agreed to take part in the Giorgio Armani Acqua for Life #1Day10Litres Challenge on World Water Day. Two friends and I will be spending our day with access to just 10 litres of water. Which may sounds like very little to you and I, but is more than what a huge chunk of the population has access to. We’ll have to wash, cook, drink and go about our usual day with just 10 litres. I’ll be tracking our day on Twitter, Facebook and Instagram, and if you’d like to see what other participants are up to around the world, follow #1Day10Litres on these channels.

To give you all a better idea of what the Giorgio Armani Acqua for Life organization is all about, I’ve included their press release below, which has all the info on their partnerships with Green Cross International and UNICEF. 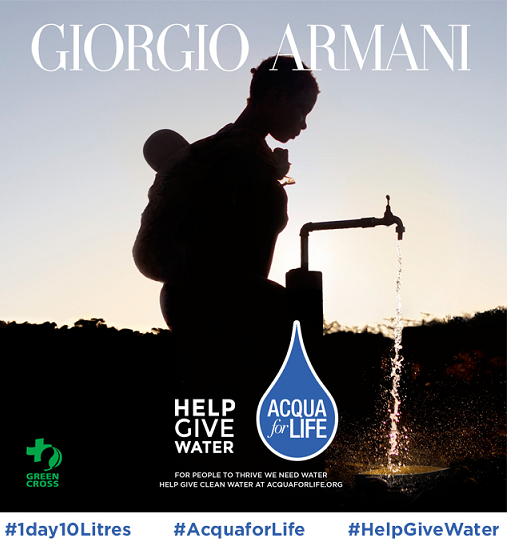 A COMPREHENSIVE APPROACH COMMITTED TO THE ISSUES OF WATER, HYGIENE AND SANITATION  For the 6th year running, Armani is repeating its commitment to the Acqua for Life development program with Green Cross International, a global initiative which, since 2011, has already given 108 communities in 8 countries and 3 continents access to drinking water, i.e. 880 million liters of water provided*.  Every year, since 2010, as part of Acqua for Life, Armani has educated public opinion on issues related to water, raising funds and acts in the field, in partnership with Green Cross International and UNICEF, by installing water points, latrines, rain water collection, water filtering and purification systems, in areas that lack water or drinking water, a natural element fundamental to life.  In 6 years, Acqua for Life has set up projects worldwide which have sustainably transformed daily life that had hitherto incurred mortality, disease and deprived children of an education owing to the lack of water or access to contaminated water for a large proportion of the community. The main victims of this situation are the most vulnerable: children as well as women.

* 2015 Green Cross International figures for the Acqua for Life program

ACQUA FOR LIFE: access to water but also educating communities for a lasting impact

Acqua for Life is a project that is not limited to the supply or rehabilitation of water points. It is a comprehensive program which also focuses on the significant improvement of public health conditions. To ensure the sustainability of the project, Green Cross International conducts awareness campaigns on local water issues and hygiene, especially in schools, so that children are aware from an early age of simple actions such as washing hands with soap to prevent the spread of germs. In addition to water points, Green Cross International builds latrines and washbasins to provide hygiene means and protect the immediate environment. Finally, the sustainability of the project also involves training adults in the proper use and maintenance of infrastructure.

With Acqua for Life, families reclaim the right to drinking water and sanitation recognized by the United Nations in 2010. They have water to drink, prepare food every day, wash, water crops and for their livestock and children can attend school more regularly. Women have more time to focus on their children, dedicate time to their literacy and be productive for their community instead of having to fetch water.

ACQUA FOR LIFE with UNICEF in the United States

For the sixth year running, Armani continues to be a major partner of the UNICEF “Tap project” through a donation to support the Acqua for Life initiative dedicated to bringing drinking water to populations in need all over the world.

Since it was created in March 2007, the UNICEF “Tap Project” has raised more than 5 million dollars for programs dedicated to water and sanitation in Belize, Cameroon, Nicaragua, Guatemala, Togo and Vietnam, in Central African Republic, Côte d’Ivoire, Haiti, Iraq and Mauritania. 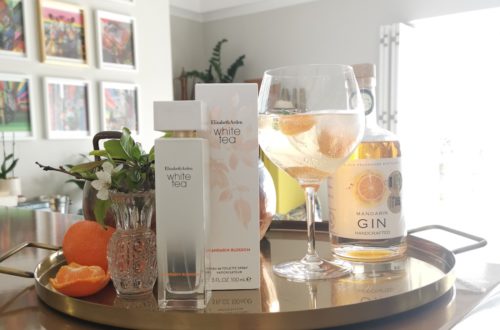